In this week’s update, learn about the removal of the 7-day publication window for Google Posts; new interfaces for review flagging and photo insights in GMB; changes in Google review summaries; why GMB listings get suspended; and Google’s threatened shutdown in Australia.

As reported on the BrightLocal blog and first detected by local SEO Brodie Clark, Google Posts older than 7 days are now appearing in the Knowledge Panel for many businesses. Previously, most Google Post types were removed from prominent display in the Knowledge Panel after the 7-day mark, with some exceptions -- COVID-19 Posts stayed live longer, about 14 days, and event-type Posts could be configured to persist for up to a year.

Now, Posts are showing up in prominent positions in the Knowledge Panel, even if they were originally published months ago. Photos, too, used to become less prominent over time, but Clark is seeing evidence that older photos are being shown more prominently than before. Many observers around the world have apparently been able to replicate this new behavior, at least as far as Posts are concerned. Though Google has as yet made no official statement, we can at least tentatively state at this point that Posts appear to no longer have an expiration date. If this supposition proves true, Posts will likely see a boost in popularity.

Nice one for Local SEOs to be aware of. Now seeing standard Posts appears from months back by default. Would show for 7 days previously, then "expire" and become hidden behind the 'view all' button. Glad to see more visibility given to Posts – this change makes sense IMO. pic.twitter.com/H3pQTDG5qH

Joy Hawkins points out that Google My Business has updated the interface that allows business owners to flag fraudulent or inappropriate reviews. This is the version of the review flagging feature that appears within the Google My Business dashboard, not the public version available to any user. Google has slightly reorganized the available reasons for flagging a review, added explanations for each reason, added a new “personal information” option, and added a notice once stating that it may take 3 business days to process the request.

The valid reasons for flagging a review, and their associated explanations, are worth repeating here, as they clearly define what counts as an inappropriate review from Google’s perspective. Thanks to Barry Schwartz for reproducing the list in his Search Engine Land writeup.

The Google My Business dashboard is now distinguishing, in the Insights tab, between photos uploaded by the business and photos uploaded to the listing by Google users. A new filter option allows the user to select “All photos,” “Owner photos,” or “Customer photos,” showing the count for each selection mapped onto a timeline. Barry Schwartz points out that the interface change may date back to September 2020 but is not well known. The Google My Business API has provided separate counts for owner vs. user photos for some time, a rare example of functionality appearing first in the API and only later in the GMB UI. 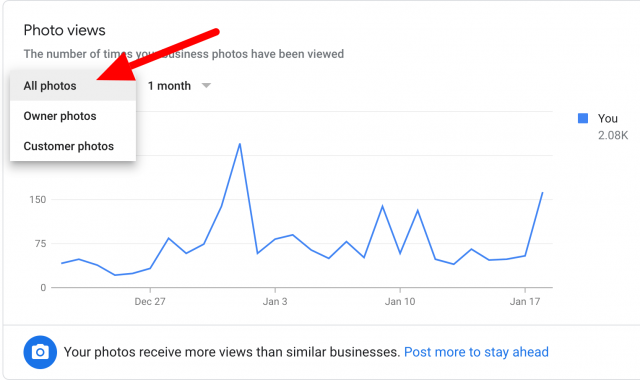 Mike Blumenthal, writing in the GatherUp blog, has noted some recent changes in the way Google displays review summaries within listings. Review summaries (or review snippets, as they are sometimes called) appear in the form of three brief sentences at the top of the reviews feed for a business, highlighting content from the reviews below. Previously, Blumenthal notes, businesses with an average rating of 4.3 stars or less tended to have at least one negative statement in the review summary section.

Now, however, the mobile versions of GMB listings in both the US and Canada are displaying a new kind of review summary that appears to be based on the most popular topics in reviews. There are still three summaries in the listing, but now each summary displays a count of the number of people whose reviews touch on the topic mentioned in the summary.

Google is also now displaying summary cards in mobile search for third-party review sources like DealerRater and Auto.com (for automotive businesses), providing additional visibility for those reviews. Blumenthal speculates that you might need to have at least 10 reviews on a third-party site before Google will display a summary card for that site.


Why GMB listings get suspended

Sherry Bonelli of Early Bird Digital Marketing has offered some common reasons for GMB listing suspension and what to do about them on Search Engine Journal. Bonelli notes that, for many small businesses, a GMB listing is the only form of digital marketing they do. For those businesses, suspensions can be catastrophic, since they make Google listings invisible to users and do not provide a clear reason to the business owner for why the suspension has been imposed.


When listings are suspended, the business owner receives a notification email from Google, and the suspension is also noted in the location’s GMB dashboard. Common reasons for suspension, according to Bonelli, break down into the following categories: issues with addresses; too many edits in a short period of time; algorithm changes (or unintended bugs) on Google’s part; penalizing online-only businesses (who do not qualify for GMB listings); and violations of GMB guidelines.


If your listing does get suspended, you can submit a request for Google to reinstate it, presumably after you’ve made whatever changes you think are necessary to address the probable reason for the suspension.

Google has threatened that it may retreat from the Australian market if a code is enacted in Australia that would force Google and similar companies to pay news media entities for placement in search engine results. Google has independently reached agreements with other media outlets around the globe, including a recent deal in France where the search giant has agreed to pay publishers for content. The difference here is that Google would be compelled to negotiate agreements with Australian publishers, rather than working out agreements on its own timeframe. Google’s managing director for Australia, Mel Silva, wrote, “The principle of unrestricted linking between websites is fundamental to search and coupled with the unmanageable financial and operational risk if this version of the code were to become law, it would give us no real choice but to stop making Google Search available in Australia.”


The ultimatum, if enacted, would mean that 19 million Australian citizens would be prevented from accessing the search engine. Facebook has also threatened to remove news results from its feed in light of the proposed legislation, a move that would impact 17 million users.