In this week’s update, learn about new rich menus from GMB; ratings and photos in Apple Maps; the characteristics of the average GMB profile; updated GMB guidelines for hours and virtual offerings; new GMB badges for “LGBTQ-friendly” and “Women-led”; and Apple and Google reports on consumer mobility.

Google has released version 4.7 of the Google My Business API, a release that focuses on a significant expansion of available features for restaurant menus. Whereas before, restaurant menu content had been limited to menu section, menu item, description, and price, now restaurants can include nutrition information, portion size, cuisine, spiciness, and many other details. The full list of fields is shown below.

Note that these new, rich menus can, for the time being, only be managed and updated using the API; the expanded feature set is not yet available in the Google My Business dashboard. Also important to note: rich menu content will not yet be shown publicly in GMB profiles. According to our contacts at Google, there are plans to redo the public-facing display of menus, but the first step Google has taken is to try to source rich menu content from as many restaurants as possible. Rich content will be used, according to Google, in order to identify relevant listings for long tail searches.

So, for instance, restaurants using the “dietary” field to indicate which of their dishes are vegan will supposedly be more likely to surface when diners search for restaurants with vegan offerings.

Apple Maps may be adding native photos and ratings

According to a report in 9to5 Mac, a beta version of iOS 14 includes an Apple Maps update that allows users to add ratings and photos to business listings. If rolled out broadly, this update would provide for the first time a method for Apple Maps users to directly share their feedback after visiting a business. Since its inception, Apple Maps has relied on third party sources, primarily Yelp but also Foursquare, TripAdvisor, and others, to supply review and photo content for listed businesses.

The report indicates that only a small number of listings may initially have the new features enabled. Users who do see the rating feature will be prompted to give the business a thumbs up or thumbs down in place of a star rating. In this way, Apple Maps ratings will be similar to Facebook recommendations, which also make use of the thumbs up / thumbs down model. Users will also reportedly be prompted to rate different aspects of a business, such as product quality and service experience at a retail store. From the screenshots, however, it appears that users will not have the ability to write about their experience; the feature seems limited to offering or withholding recommendations.

A column by Greg Sterling on Search Engine Land covers the results of a 2019 study from Places Scout about the characteristics of GMB profiles. Places Scout’s analysis of 2.4 million business listings found that 62.2% had been verified by the business owner; a similar, more recent study from Whitespark of 800,000 businesses put the figure at 49%.

Also according to Places Scout, the average Google My Business profile is 72% complete. Here are some more of the study’s findings:

These figures are now a few months old, and the COVID-19 pandemic has undoubtedly had an impact on business owners’ involvement with their online profiles. Still, the results indicate that many businesses have tremendous opportunity to improve the effectiveness of their GMB presence.

On August 25, Google introduced several updates to its help documentation related to hours of operation and virtual service offerings. First, businesses that would typically offer in-store services but are currently operating in an online-only mode are told they should not list any standard hours of operation, but should instead indicate the hours of virtual services using the new More Hours feature.

In the words of the updated documentation, “If your business is open, but does not offer onsite services where you’re physically meeting with a customer, leave your primary hours blank. This includes when your business offers only online services. You can set hours for online services using the Online hours field under ‘More Hours’ in the Info tab.”

Google has also added a qualification for businesses who want to indicate the availability of online services: “Only virtual appointments via live video qualify. The option for customers to book online for in-person appointments does not qualify.” Google has indicated that phone appointments also qualify as a type of virtual offering.

According to Local Search Forum contributions from Colan Neilsen and several others, at least some users are seeing new badges in GMB profiles for attributes including “LGBTQ-friendly” and “Women-led.” The visibility of these attributes seems to differ by business category, though this may be due to a gradual rollout that has not yet reached all users and categories.

Like the “Black-owned” attribute launched in July, these attributes are accompanied by badges that indicate the status of the business visually, as shown in the screenshots below. 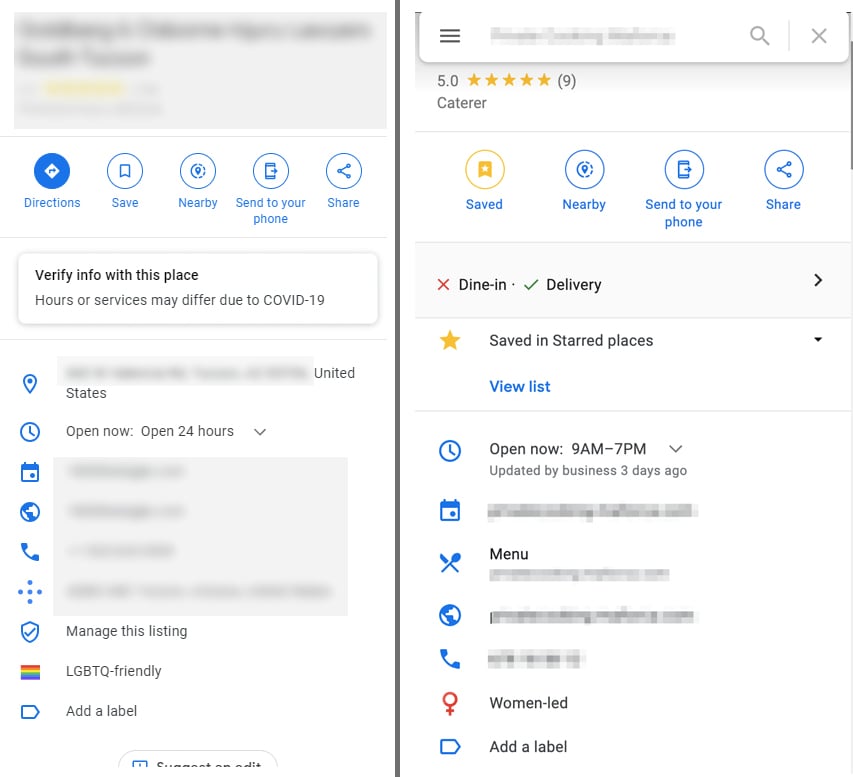 Trend reports from both Apple and Google track changes in mobility patterns over time for consumers during the pandemic period. Google’s report for August 25 shows that in my county, San Luis Obispo County in California, people are traveling less often to retail and recreation spots and more often to parks, compared to baseline activity in January and February. People are also spending 10% more time at home and 37% less time at the workplace, compared to the baseline. 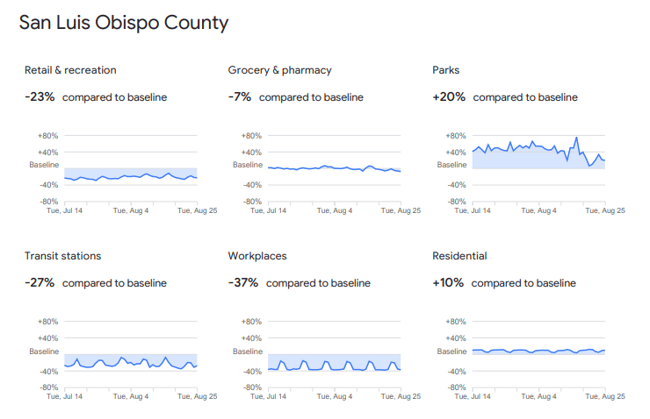 Apple’s similar report focuses more on types of mobility, such as driving, walking, and public transit, as opposed to the types of places people are visiting. According to Apple, consumers are driving in great numbers, exceeding the baseline since June, but are walking and using public transit less often than usual.