Google may use Quality Visit Score as a ranking signal

In his ongoing exploration of Google’s issued patents, Bill Slawski has identified several planned innovations from the search company that relate to the measurement of store visits. As we all know by now, Google has access to millions of store visit data points collected from users of Google Maps who have opted to share location information with the company. In the past, Slawski has theorized that Google might use this data to rank businesses according to factors like travel time and mobile location history.

Now, Slawski has examined a new patent that assigns a Quality Visit Score to businesses based on the number of visits from the average user, the length of each visit, and related factors that together act as a measurement of popularity. Slawski surmises that Google will measure visit length differently depending on the type of business; for instance, a five-minute visit to a sit-down restaurant would not count as a quality visit, where a five-minute visit to a dry cleaner probably would be counted.

A majority of Google searches now result in zero clicks

According to a new study from Moz founder Rand Fishkin’s company SparkToro and data company Jumpshot, in June of 2019 a significant milestone was reached: more than half of all Google browser searches on desktop and mobile resulted in zero clicks. This finding is a strong indication that Google has effectively de-emphasized its original primary function -- acting as a gateway to the larger internet -- in favor of a “walled garden” approach (as Fishkin describes it) where answers to user queries are increasingly provided by the search engine itself. 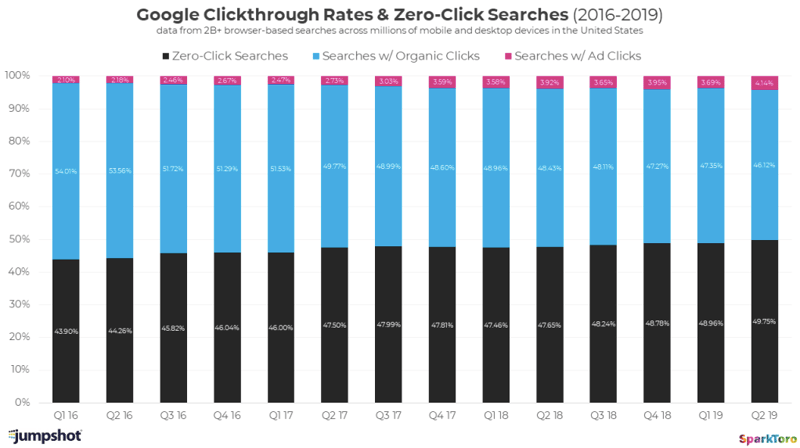 In the chart above, you can observe the steady growth in zero-click searches from 2016 to 2019. In fact, on mobile browsers zero-click searches have accounted for more than half of all searches since back in 2016, but it has taken until this year for combined mobile and desktop searches to tip over the 50% mark. Ad clicks are much higher on mobile as well, suggesting that Google has focused the majority of its attention on optimizing the mobile browsing experience for zero-click results and ad clicks, presumably capitalizing on the mobile user’s need for quick answers reached with a minimum of scrolling.

The study also estimates that Google’s actual share of overall search traffic is at least 94% and possibly as high as 97% or more.

Google has added a new “Manage Reviews” tab to the Google My Business dashboard for location groups with fewer than 500 locations. The feature does not appear in organization accounts. Within the new tab, users can view, reply to, and flag reviews from all locations in one interface, potentially making it easier for multi-location businesses to keep track of their reviews. Google has, of course, made multi-location review management available in the past via service providers using the Google My Business API. Using the API, service providers can help multi-location brands manage reviews on multiple sites in one interface, and can provide valuable additional features such as review insights and tagging.

In news that could have major repercussions for the connected automobile, electronics giant Bosch has announced it is developing a 3D technology for cars that works without glasses and without eye tracking (which requires focusing your eyes on a specific point). The technology would make it possible to create alerts that pop out at critical moments, or to offer drivers a 3D model of their surroundings -- perhaps to prevent blind spots or to provide more precise and easy to follow driving directions. This new innovation is made possible, according to Bosch, partly because of advancements in automotive technology that are consolidating functions once handled separately and managing them with more powerful central computer systems.

As it acknowledged in a recent statement, Facebook -- like Google, Amazon, and Apple -- has hired contractors in the past to listen to and analyze user audio recordings. The statement claims the practice has now been halted. In Facebook’s case, contractors were paid to review and transcribe audio from the popular Messenger app, in order to check the accuracy of automated transcriptions created by the app’s Voice to Text feature. Though this feature is turned off by default, it appears that if anyone in a Messenger conversation had enabled it, audio recordings of the entire conversation might have been shared with Facebook’s contractors.

Microsoft has also issued a statement following news reports that contractors were hired to analyze audio recordings of Skype and Cortana users. The company’s privacy policies have been amended to explicitly mention the practice. In its statement, Microsoft offered an explanation that speaks to why human review of audio recordings is so common: “To build, train, and improve the accuracy of our automated methods of processing (including AI), we manually review some of the predictions and inferences produced by the automated methods against the underlying data from which the predictions and inferences were made.”

In other words, human review of automated processes is an important means of ensuring and improving performance; but heightened privacy concerns suggest that such practices should be restructured.

Two major retailers painted opposite pictures of the health of the retail sector in their earnings reports for the second quarter of 2019. Walmart reported an increase in same-store sales for the quarter as well as a 37% lift in online revenue, whereas J.C. Penney posted net losses and a 9% revenue drop, amidst plans to open up space in 30 of its retail stores to sell second-hand clothing through partner ThredUp. J.C. Penney’s move towards lower priced goods may make sense in light of the continually strong performance of discount retailers and dollar stores, while Walmart’s growth offers further evidence of its ability to compete in a modern retail sector that combines online and offline shopping in an increasingly seamless fashion.