In this week’s update, read about new features in Google Maps; a new format for local results on mobile; the relationships between ranking factors; detailed info on GMB suspensions; the benefits of GMB photos; and a “New” flag for reviews.

In a major announcement, Google has detailed several updates to Maps, some already live and some rolling out in the coming months. First, a new indoor Live View feature is designed to help people navigate inside large indoor spaces such as airports, shopping malls, and transit stations. For instance, at airports and train stations, Live View will help users “find the nearest elevator and escalators, your gate, platform, baggage claim, check-in counters, ticket office, restrooms, ATMs and more,” according to the announcement.

In addition, Maps will add a weather layer that reports on current weather conditions as well as air quality, along with eco-friendly navigation options that help users find routes and transportation methods with the lowest carbon footprint.

Finally, Google is adding new delivery and curbside pickup functionality to Maps, with an emphasis on grocery shopping. Information will be added to GMB profiles about “delivery providers, pickup and delivery windows, fees, and order minimums,” starting with Instacart and Albertsons grocery stores in the U.S. Another pilot with grocery chain Fred Meyer integrates online ordering with Maps, with new features including a notification when it’s time to leave to pick up your order and a check-in button to notify the store when you arrive.

A new format for local results on mobile

Joy Hawkins reports that Google “has been slowly making some big changes to mobile search results over the last couple of weeks.” Screenshots provided by BrightLocal help to demonstrate the change, though several users Hawkins checked with could not reproduce it. In the new format, the local pack in mobile search results shows only two results instead of the typical three. The local packs for searches tested by Hawkins appear to have switched to the two-result format on different dates in March. Some local packs that display an ad in the first position are also now showing two results below the ad where three would have appeared previously.

This change lends even greater weight to the first two ranked listings, makes competition for top ranking even more important, and creates a greater discrepancy than before between desktop and mobile results. Ben Fisher and Claire Carlile were also able to replicate the two-pack result, though Barry Schwartz reported that he could not, and I cannot either. It’s unknown whether this is just an experiment or a gradual rollout. 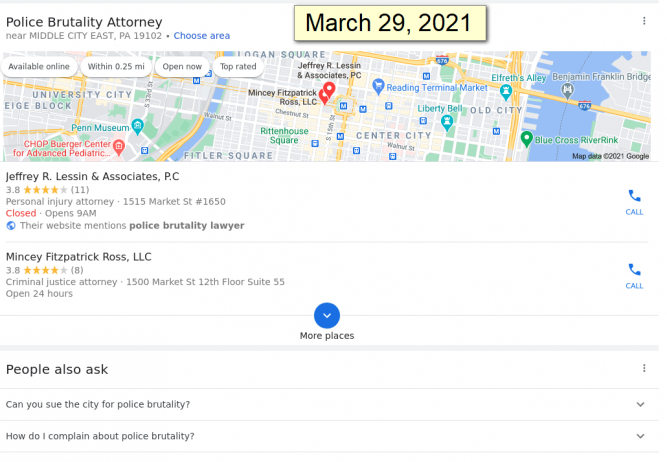 Phil Rozek on the relationships between ranking factors

Phil Rozek has an interesting post on his blog about the ways in which local ranking factors influence each other, often in a counterintuitive manner. He observes, for instance, that businesses can rank well in a broader geographic area for search terms that represent a niche offering of some kind, simply because Google must cast a wider net to find businesses matching very specific search terms. You can also rank faster, he says, for very specific niche searches.

Rozek finds that sites with a strong backlink profile tend to rank more quickly when they add new content, and to have a stronger positive influence on the ranking of linked GMB profiles. In general, he says, sites that perform well in organic search tend to have a greater impact on the ranking of GMB profiles linked to them. Amongst several other correlations Rozek discusses, he observes that better performance of a webpage, the more likely you can also get it to rank for other terms loosely related to the terms it already ranks for.

Google has begun sharing more detail via email with business owners about the reason their GMB profile has been suspended, as discovered and posted on Twitter by Ben Fisher and Lluc Berrio Penycate. The example posted by Fisher states, “Your Business Profile on Google has been suspended because the address used in your profile doesn’t match the physical location of the business.” The email includes steps for reinstatement and several tips or reminders such as, “Your business location should be staffed during its stated hours.”

The example shared by Penycate identifies the GMB profile in question as a duplicate of another verified listing, stating, “When you add a location that’s already been verified in Google My Business, it won’t appear on Google Maps and Search and will be marked as a ‘duplicate location’ in your account.” The email goes on to suggest that the user can request ownership of the previously verified listing. 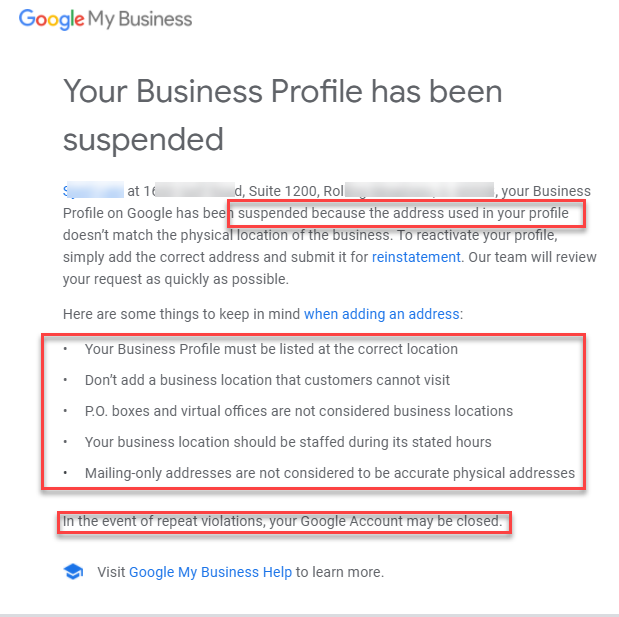 More on the benefits of GMB photos

In a new video post, Darren Shaw outlines several reasons why photos are more likely to cause your GMB profile to convert searchers into buyers, as well as offering several tips to help businesses get more photo content into listings. This follows from a recent post by Michelle Ofiwe on the SEMRush blog, discussed in this space two weeks ago, which offered similar recommendations. Shaw points out that Google has provided statistics in the past stating that businesses with photos get 42% more requests for directions and 35% more website clicks. He also reminds us of Mike Blumenthal’s research showing that Google will sometimes showcase photos from your listing in search results when the photo content matches the intent of a query.

Shaw also suggests that Google’s Vision AI is strong enough to be able to understand the text displayed in images, and so images with text that matches keywords the business wants to rank for might possibly strengthen its ranking.

I’ve reported recently on several small tweaks to the presentation of Google reviews, such as the new “Helpful” and “Not Helpful” buttons I mentioned last week. Another feature that appears to have rolled out more broadly is a “New” flag next to newer reviews, as reported by Barry Schwartz. This flag appears on both desktop and mobile and I was able to reproduce it easily, as shown in the screenshot, so it is likely live for most users.