Jason Parks from the Media Captain has posted on Twitter some examples of a new website display format in the local pack that Barry Schwartz is calling "Site Cards." These "cards" display the favicon and title of the business website. As Schwartz notes, the feature seems designed to drive more traffic to business websites. Here's an example from Jason Parks where the second and third listings have "Site Cards."

Also in the local pack, Tom Waddington is seeing a "Request Quotes" button that appears above all listings and allows users to request quotes from multiple providers. As far as I can tell, this feature is unrelated to the actual listings displayed in the local pack and is instead a prompt to check out businesses running Local Services Ads, in particular those who participate in the Google Guaranteed program. As such, it would seem designed to move users aggressively away from organic listings and toward ads. However, this may only be a test on Google's part.

Also spotted by the eagle eye of Tom Waddington is a new "Areas Served" section that now displays for some service-area businesses, such as Mr. Rooter in San Diego. I can reproduce the feature when searching for "mr rooter san diego" in a mobile browser. A truck icon is shown next to a summary of the service area covered by the business; in this case, "Serving San Diego and nearby areas." Clicking on this element takes you to another page that lists all service areas for the business. Along with the "Request Quotes" feature above, this is evidence that Google is looking at ways to improve the visibility of service area businesses. 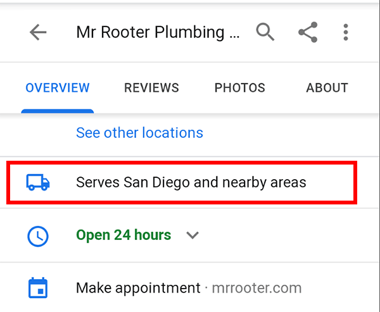 Yet another new Google feature noticed in the past week is "Place Topics," which previously only showed on mobile but have been spotted in a desktop listing -- her own listing in fact -- by Joy Hawkins. Place Topics are tags showing words and phrases that crop up frequently in reviews. Clicking on any Place Topic filters the reviews so that you see only reviews mentioning the chosen topic.

This item was actually first noticed in mid-November but I missed it. Branded pins are a sponsored product from Google that is available to multi-location business who meet certain spending thresholds. Branded pins display in Google Maps and make the business stand out from others who have more generic map pins. Now, branded pins also display when Google Maps is in navigation mode. This should provide a compelling use case, making it easier for users to add a stop to a branded location while en route to some other destination.

Danny Sullivan stated on Twitter the other day that speakable markup, one of the Schema definitions that Google has recently been using on an experimental basis, is "no longer restricted to news content" and that Google would be "updating our documentation on this." It's unclear as yet what the expanded use cases for speakable markup might cover; but the intent of the markup is to indicate areas of text that are appropriate for voice assistants to recite out loud, so presumably Sullivan is pointing to Google's expanded use of these signals, a development which may give content creators more control over how Google Assistant uses text in spoken answers.

Commentators like Ben Fisher and Andrew Shotland say that Google's incentives, from movie tickets to Google One memberships, cause many Local Guides to make poor-quality contributions just to get points. Greg Gifford points out that the high point value of answering questions in GMB Questions and Answers has led to a proliferation of useless answers. Both Dan Foland and Ben Fisher say that Local Guide status has become one of the common traits of spammers.

Joy Hawkins points out that Google has made some recent moves to increase the legitimacy of Local Guides, such as creating a method for reporting Guides who spam businesses, and launching a feature that lets users follow Local Guides and receive recommendations. Overall, however, local SEOs are skeptical about the success of the program.