A new fork-and-knife icon has been spotted in the wild in certain Google restaurant listings, indicating that the user can order food delivery. I was able to get the icons to appear when searching for local chains such as McDonald’s and Starbucks, so I’m assuming this feature has already been rolled out broadly. Clicking the icon takes you to an interstitial page where you can choose a delivery service -- in my case, the only option was DoorDash, but options are presumably driven by what’s available at your location. Given the recent controversies around food delivery services and the traffic they may be redirecting away from restaurants themselves, this new and prominent delivery option may be treated by restaurants as a mixed blessing. 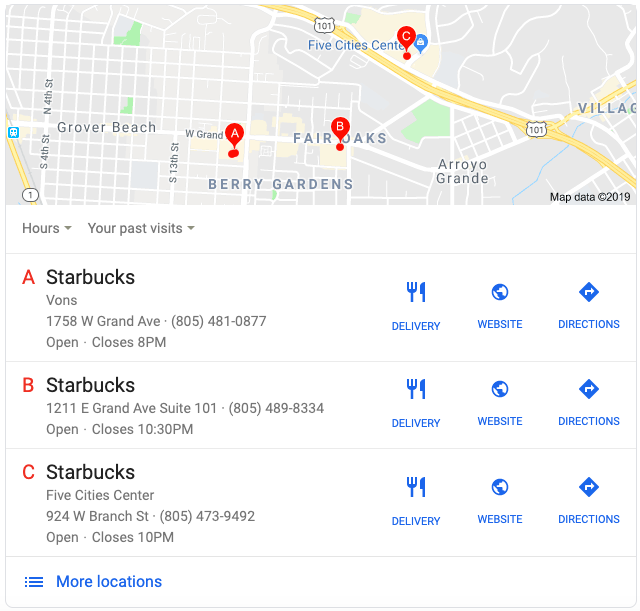 Business owners can now respond to reviews directly from the Google Maps app, as long as they are using an Android phone. For any verified Google listing, any user who has owner or manager status and is logged in on Google Maps with the same account will be able to access this feature. Tapping a new heading in the main nav called Your Business Profile is the quickest way to get to your business, after which you can tap Reviews and respond to any review. Google suggests that this option might be easier for some users when they’re away from the computer. No news yet on when the feature might become available on iPhones.

You may be familiar with Google Guaranteed, a certification and consumer protection program introduced by Google a few years back. In-home service providers in categories like appliance repair, house cleaning, and plumbing can apply to become Google Guaranteed and have that status appear in Local Services Ads; consumers can get their money back (up to $2,000) through Google if they aren’t happy with the services they receive. The program has expanded so that today, Google Guaranteed status is a requirement for service providers who want to appear in Google Assistant results.

Now, the company is introducing a similar certification called Google Screened which applies to professionals such as attorneys, financial planners, and realtors. The program is currently in limited release in San Diego and Houston. Businesses must have a star rating of at least 3.0 to apply, and must pass a license and background check. Unlike the Google Guaranteed program, Google Screened has no money-back guarantee.

Generally speaking, certification programs like Google Guaranteed and Google Screened represent an attempt by the company to address concerns about the quality, safety, and authenticity of listings in service categories, a perennial issue that has gained visibility recently in news stories about listing spam in the Wall Street Journal and elsewhere.

No, you can’t opt out of mobile-first indexing

Google SEO guru John Mueller has confirmed in a recent Ask Google Webmasters session that the company has no “plan to provide an opt-in or opt-out” to mobile-first indexing. Mobile-first indexing is the initiative, announced back in 2016, whereby Google crawls websites using a mobile version of the web as its information source. Though it has been rolling out slowly and still has not been applied to all websites, eventually mobile-first indexing will replace the traditional desktop-based index as Google’s primary means of collating the world’s information. The mobile-first index is capable of crawling sites that do not have a dedicated mobile version and are not responsive, but it’s still highly important to ensure that all of the data on your site can be viewed in a mobile browser, or it could potentially be missed by the mobile-first index and thus become invisible in search.

According to news reports, Apple will unveil a host of new hardware models in September, including three new iPhones, three updated iPads, and a larger MacBook Pro model. The phone releases include a new category Apple is calling the Pro iPhone, which will offer more sophisticated photo and video features presumably meant to appeal to professionals and those interested in high end media production. The iPad changes also include photo and video upgrades, and the new MacBook will be larger at 16” than any current Apple laptop -- another attempt on Apple’s part to cater to media professionals. The company hopes to improve upon disappointing hardware sales at the end of 2018.

Overall, the updates suggest that Apple sees increasing demand for what might be called “visual use cases”: visually-oriented social apps like Snapchat and Instagram; professional and high-end hobbyist media production; and highly popular photo editing apps like Facetune and VSCO, a growing segment in the teen and young adult demographics.