Happy Martin Luther King Jr. Day! In today’s Monday Memo, we look at Google’s acquisition of Pointy; the rollout of Popular Products on mobile; local search alternatives in the EU; the myth of structured data as a ranking factor; and Alphabet’s $1 trillion milestone.

News broke last week that Google has acquired Irish startup Pointy for about $163 million. The company markets a solution that combines hardware and software to help retailers sell their products online “instantly,” according to company messaging. Pointy’s key innovation is a clever means of removing most of the effort from online selling. Products are uploaded via Pointy hardware -- or via supported third party point-of-sale devices like Clover or Square -- at the moment they are scanned for sale, each subsequent scan adjusting the inventory automatically, with total inventory determined by an algorithm. Pointy then helps the business market those products by creating optimized product pages and helping to set up and manage Local Inventory Ads on Google.

Google first partnered with Pointy back in 2018 as a way of getting more product inventory into the “See What’s in Store” component of local search results. Pointy says its technology is already in use by 10% of U.S. brick and mortar retailers in some categories such as pets and toys. With the acquisition, Google could significantly ramp up that growth and thereby take a big step toward large-scale acquisition of small business product inventories.

Just one day after the news of the Pointy acquisition came Google’s official announcement of a new “Popular Products” feature on mobile devices. According to the announcement, Popular Products “identifies popular products from stores across the web and brings them together in a new section on Search.” Somewhat like the Search by Photos feature first noted a few months back that calls out photos from business listings in a separate section, Popular Products is an image-based gallery of product options, in this case including filters that help you find the product you’re looking for.

In the example I looked at, a search for “running shoes” brings up products from several online retailers including Zappos, Finish Line, JD Sports, and Running Warehouse, with price comparisons, color options, and product reviews sourced from the retailers’ sites. Popular Products was buried somewhat far down the page, past a tall stack of ads and a local pack, but if you manage to find it the search experience is fairly impressive. And it’s not a paid product -- Google makes it clear in the announcement by saying, “Just as we don't charge sites to be part of the Google Search index, participating retailers appear in this new feature for free.”

Local availability of the listed products is not called out in any way I could determine, unless by visiting the retailers’ site. Still, it’s clear that the new feature, like the Pointy acquisition, aligns strategically with Google’s intent to compete with Amazon on its own terms and become a stronger conduit for product searches.

Nicolai Helling has shared on Twitter some screenshots of Google results in Germany that show third party alternatives, including Yelp, TripAdvisor, and Groupon, above the local pack in searches for multiple categories including supermarkets, hair stylists, and pet stores. The alternative results appear in horizontally oriented carousel format with the heading “Find results on.” 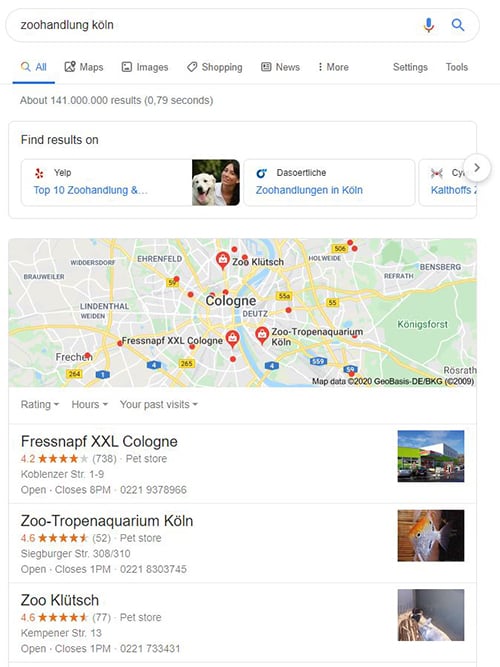 Though taking up only a modest amount of real estate on the page, the links stand out as a rare example of Google appearing to modify its results in response to European allegations of monopolistic behavior. Similar results in Spain were captured and shared, also on Twitter, by Fede Gómez. In the Twitter thread started by Helling, Luther Lowe, VP of Public Policy at Yelp, dismissed the news, writing, “They’ve done this a few times. It’s an attempt at a peace offering to EU that won’t work because the rival link CTR is (and absent gov’t enforcement, always will be) de minimis. It’s potentially connected to earlier news today that Sundar is meeting Vestager next Monday.” Lowe was referring to Margrethe Vestager, the EU’s Commissioner for Competition.

Google has reiterated its statement that presence or absence of schema markup does not affect a site’s ranking. The company has said so several times before, but took to Twitter again to provide a lengthy explanation of the role of schema in response to a food blogger who posted about the supposed need to provide schema-tagged calorie counts in order for her site to rank well. According to the company’s posts via the @SearchLiaison handle, “Content owners can provide structured data as an *optional* way to enhance their web page listings. It has no impact on ranking. Using it may simply help pages that already rank well appear more attractive to potential visitors.”

Google’s parent company Alphabet just became only the fourth company in U.S. history to reach a market value of $1 trillion. On January 16, Alphabet’s stock closed at $1,451.70, tipping the company’s estimated value over the trillion-dollar mark for the first time. Back in 2018, Apple became the first company to achieve the milestone, later to be joined by Microsoft and Amazon (though Amazon’s total value has since dropped below $1 trillion). The news underlines the fact that Google and its sister companies, under CEO Sundar Pichai, have entered a new phase focused on growth and monetization.