In this week’s update, learn about the “photo updates” pilot and a new “Call” button in Google My Business; a list of items that are not ranking factors; a survey showing consumers want mask enforcement; another survey showing consumer preference for contactless transactions; and a clarification from John Mueller on the influence of negative reviews on ranking.

In a new pilot announced by way of a dedicated help page, Google My Business is apparently trying out the idea of “photo updates,” a new feature that lets customers “highlight your business with photos they’ve recently taken.” This new type of UGC photo content is different from photos uploaded to the business profile or photos attached to reviews. The help pages says that “customers visit a Business Profile on the Google Maps app, they may have an option to add a photo update, in addition to a review.”

Photo updates are described as a review-like entity with some differences. They can contain text along with the photo, but do not contain a star rating. They will appear in the Reviews tab of the GMB listing, and businesses can respond to them. Unlike reviews, which can only be written once per business for each reviewer, users can upload multiple photo updates to one listing. Currently, businesses do not get notified when new photo updates are posted, and cannot post photo updates themselves.

We have yet to see this feature in the wild -- if you see it, please send us a screenshot!

In an update that is showing up for many users in several countries, Google is showcasing a new “Call” button alongside common buttons in the Knowledge Panel like “Website” and “Directions.” As the feature apparently rolled out, some users were only able to see it when logged in to their Google profiles, but this limitation appears to have been removed. I can see the “Call” button in the example below whether logged in to Chrome or viewing in incognito mode, though I cannot see it in Safari or Firefox. 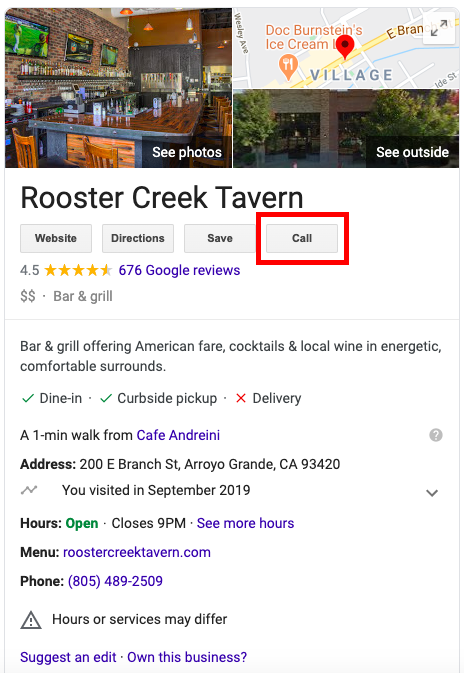 The interesting thing about this new feature is that it attempts to create a path for calls to be completed directly from the desktop interface. Depending on the integrations available on a given machine, the user may see a prompt to start a call using Skype or Facebook or from the user’s iPhone or Android device. Perhaps the feature was launched in response to the huge spike in phone calls from GMB phone calls during the pandemic period, as noted in our studies on the subject. Google may have realized that users would appreciate additional options during this time to connect with businesses by phone.

No, these items are not ranking factors

On the topic of SEO myth-busting, Barry Schwartz has published a large list of factors that are known not to impact site ranking, with published sources backing up each listed item. The list includes click-through rate (CTR), time on page, bounce rate, website traffic, responsive design, presence or absence of structured data markup, accessibility, ratings and reviews, age of domain, and many others. Schwartz points out that there are many reasons to focus on site speed, usability, and CTR outside of their impact on ranking. The intent of the list is to reinforce that SEOs cannot expect changes in any of these areas to make a direct impact on site ranking. And, as he says, “Does it really matter if these are ranking factors Google uses in its search algorithm? No, not really. Just make your site awesome for your users and let Google figure out how to rank it.”

A new survey from Mike Blumenthal and his company GatherUp suggests that the majority of consumers want brick and mortar businesses to enforce mask-wearing policies for both staff and customers. The survey asks respondents whether they would be more or less likely to do business with a company that “strictly enforces mask wearing for employees & customers.”

As you can see from the results, a significant majority of respondents, about 54%, said they were more likely to do business with companies who enforce strict mask-wearing policies. The survey found support for such policies to be somewhat stronger among women than men, among consumers older than 45 than among younger consumers, and among consumers in the Northeast as opposed to those in the Midwest.

The study was inspired in part by earlier GatherUp studies showing that average ratings for many major brands have declined during the pandemic, with many negative reviews mentioning lack of enforcement for hygiene practices such as mask wearing.

Contactless commerce is “the next normal”

The study sees many consumers turning to contactless solutions during the pandemic for the first time ever, including 11% of Venmo users and 37% of users who ordered groceries online. The study also notes significant growth in adoption for meal kits and virtual fitness classes, and finds that 44% of consumers aged 25-34 and 29% of consumers aged 55+ plan to increase long-term usage of apps and online ordering. Some 12% of respondents said they will only use contactless payment for future transactions.

Clarifications from John Mueller about the ranking impact of negative reviews

In response to Mueller’s earlier comments that negative reviews won’t impact ranking, some commentators pointed to a 2010 statement from Google saying that the company would add sentiment analysis to its search algorithm, in response to a New York Times article about an online merchant who was able to rank well in Google results specifically because the merchant was mentioned in a great number of negative reviews. At the time, Google stated that the sentiment update would “turn negative comments into negative votes.” Mueller, asked whether this 2010 update was still in effect, said “we probably take something similar into account,” but it’s unlikely this algorithm component works precisely as it did ten years ago.