In this week’s update, find out about updates to the GMB Products tab; how to use the GMB “opening date” field; a broader rollout of the device breakdown in GMB performance metrics; BrightLocal’s commentary on the possible February local ranking update; hourly fluctuation in local rankings; and Google’s evolution since 1998.

As first noted by Colan Nielsen and reported in Search Engine Roundtable by Barry Schwartz, Google has begun showcasing suggested product categories in the Products tab in the Google My Business dashboard, apparently based on what Google understands about the products typically offered by businesses in your category. An example posted by Nielsen shows suggested product categories like “vehicle oil filters” and “spark plugs,” presumably for an auto parts store. Nielsen says he will soon release research into whether adding products to your GMB listing helps with ranking.

Also in the Products tab, I’ve noticed recently (this may or may not be brand new) that Google is prompting some businesses to explore an integration with Pointy, the Irish startup acquired by the company early last year that helps businesses upload their physical store inventory for online selling, through a device that connects with your point of sale system. What I’m seeing is a new popup window on the Products tab that offers two alternatives for adding products. If your products have standard barcodes, you’re prompted to check whether you are eligible to sign up for the Pointy service. If you select the other option, “Products without standard barcodes,” you’re taken to the normal Products wizard interface where you can add product information manually. It appears, from what I’ve seen, that SMBs are seeing the old version of the Products tab while multi-location retailers are seeing the new Pointy prompt. 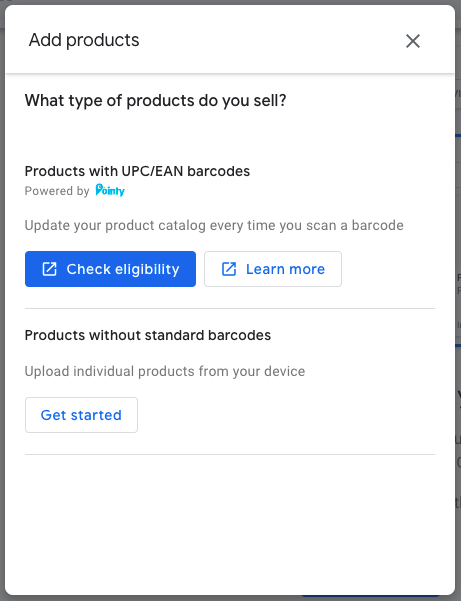 How to properly use the GMB “opening date” field

Andy Simpson offers some advice on the Local Search Forum about how to make use of the “opening date” field in GMB, a field that I’ve seen causing some confusion lately when it comes to situations like a business moving to a new location. As Simpson notes, the popup window for this field in the GMB dashboard specifically says that you should indicate the date when your business opened in that particular location. However, Google’s help documentation states that the opening date field indicates “how many years a business has been in operation,” so there is some ambiguity.

Simpson polled some local SEO colleagues, including Tom Waddington and Joy Hawkins, on this question and the consensus seems to be that for chains and franchises, you should use the date to indicate when this particular location opened for business, but for smaller businesses, you should probably indicate when you opened as a business. This version provides the user experience that will make the most sense for customers viewing your profile.

Years in business appears in some instances in Google Maps as part of the preview information displayed about each business, but does not appear consistently for all users. Still, when it does appear it can act as a trust signal for prospective customers. Some users have reported that Google is auto-populating years in business from an apparent third-party source -- Simpson suggests it may be the BBB -- so it makes sense for businesses to populate this field themselves.

The device breakdown section of the new GMB performance reports seems to be rolling out to more users, as reported by Barry Schwartz in Search Engine Land. In fact, I was able to pull up the chart shown below for one of Brandify’s client locations and I see it live for several others. The new chart appears to the left, with the new keyword table on the right, and beneath the new interactions table, both of which I’ve reported on previously. 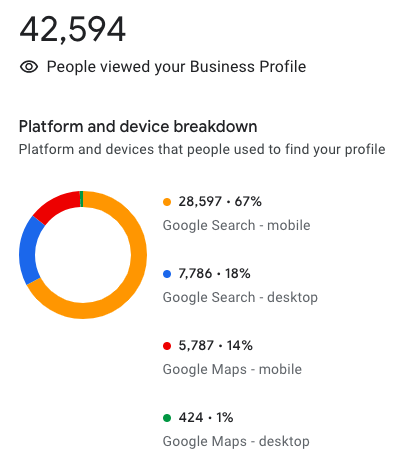 In a new help page explaining the performance metrics, Google offers some explanation of its new people-focused approach to measuring engagement with a business listing: “A user can be counted a limited number of times if they visit your Business Profile on multiple devices and platforms such as desktop or mobile and Google Maps or Google Search. Per breakdown device and platform, a user can only be counted once a day. Multiple daily visits aren't counted.” The help page notes that, due to the focus on unique users, the count of people viewing your profile may be lower than the count in Insights of views overall.

BrightLocal has issued its own commentary, in the form of a blog post from Rosie Murphy, on the potential ranking update that its Local RankFlux tool captured on February 24-25. Murphy explains that Local RankFlux tracks 14,000 keywords from a group of U.S. businesses to derive a day-to-day 0-10 score of how much rankings are changing. Scores above 2 indicate unusual levels of volatility. Murphy notes that Google updates its core search algorithm more frequently than its local algorithm, and is generally less informative about local updates. Thus far, there has been no official word from Google confirming that a local update occurred during this period.

In a survey of car dealerships and legal firms conducted by Murphy, most affected businesses saw a small fluctuation of 1 to 3 rank positions, but 20% fluctuated by 4 rank positions or more. 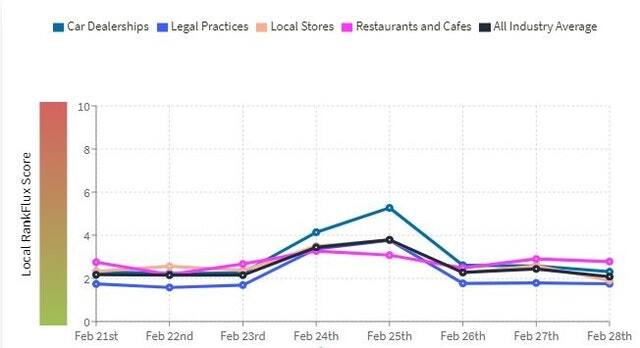 In Darren Shaw’s latest Whitespark Weekly video, Shaw explains that local rankings can change from hour to hour, with time of day being a factor in ranking that takes its place alongside other often-overlooked factors such as the browser you’re using to search. Shaw’s analysis, which removes all variables except time of day from the rankings of a set list of businesses, shows that rank positions are relatively stable for higher-ranking businesses, but extremely volatile for businesses in the lower ranks. He suspects this is partially due to the fact that Google is using AI to constantly adjust search results in order to improve their relevance. The key takeaway here is that rankings for many businesses are in a constant state of flux, a fact that rank trackers may not clearly capture. Overall trend is therefore more important than any individual result. 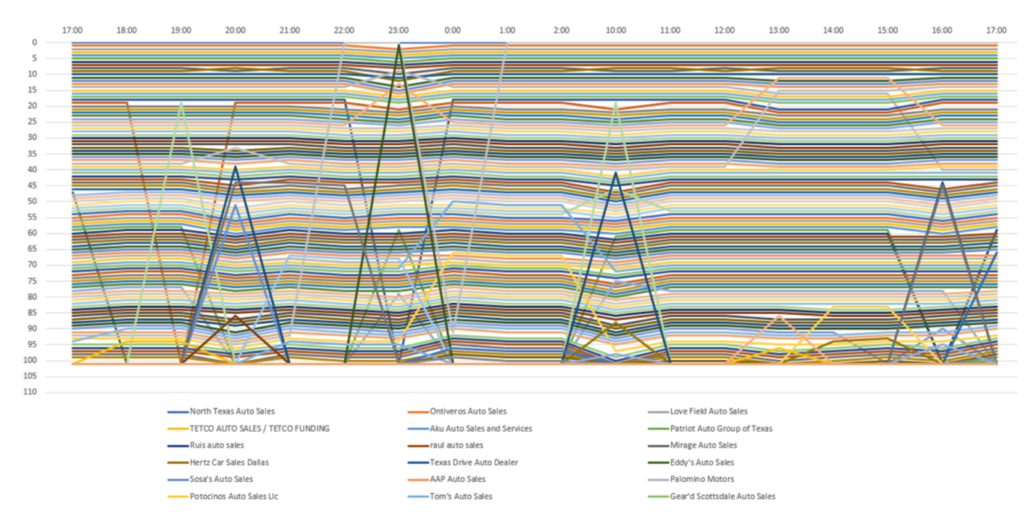 Incidentally, Shaw’s findings mirror those in a recent piece I reported on from Miriam Ellis, who found that rank positions over the course of a year also differed much more significantly for lower-ranked than for higher-ranked businesses.

Google has released an entertaining video that tracks the evolution of the search engine since its launch in September of 1998, featuring many well-known Googlers including Danny Sullivan. In tracking the changes that have taken place since the initial concept of “ten blue links” offering the most relevant search results available, the video emphasizes Google’s observation that a link is not always the best answer to a particular query. It’s for this reason that the company, over time, introduced features like image-based results and featured snippets. In the video, Google touches on local search more than once, marking the introduction of local results in 2007 and the launch of Knowledge Panels for local businesses in 2013. The video notes that businesses receive a billion calls per year from customers clicking to call from a Google profile.