Shortly after a similar announcement regarding Google, Facebook has been sued by the FTC for using allegedly monopolistic practices to maintain its dominance as a social network. The lawsuit focuses on Facebook’s acquisition of rival apps such as Instagram in 2012 and WhatsApp in 2014, claiming that Facebook has exhibited a pattern of acquiring rival companies in order to eliminate competition. Not only did the $1 billion purchase of Instagram eliminate one rival; it acted as a barrier to others who might try to compete with the combined companies. The same strategy is alleged to have led to the $19 billion acquisition of WhatsApp, which at the time was the most popular messaging app in the world.

The suit also claims that Facebook has created barriers for developers who want to interact with its platforms, shutting off access when apps (such as Twitter’s Vine) mirror Facebook’s features too closely, and forbidding developers from accessing the Facebook API to develop apps that might be perceived as competitive. If the suit succeeds, Facebook may be forced to divest itself of Instagram and WhatsApp, and may be prohibited from imposing anti-competitive conditions on developers.

A recent study from Rankings.io of GMB profiles for personal injury attorneys claims to use machine learning to analyze the validity of Local Search Ranking Factors and similar reports. The study finds that, at least for the personal injury attorneys, the city listed in the GMB profile had the biggest influence on rank position, followed by primary business category; the word “lawyer” or “attorney” in the business name and/or description; higher review counts (but not higher average ratings); higher photo counts; regular updates to the GMB profile; and strong organic SEO. The study found that basic information in GMB profiles, such as street address, had no impact on rank position, nor did social signals from Facebook, Twitter, Instagram, and YouTube.

It’s particularly notable that the study found a correlation between high rank position and keywords in the business description, given that the local SEO community was highly critical of a similar claim in Google’s own help pages back in 2019. Similarly, Google has long recommended adding photos as a way to rank better; this is another factor that has arguably been under-represented in reports like Local Search Ranking Factors. In the Rankings.io study, photo count is the fourth most important ranking factor. 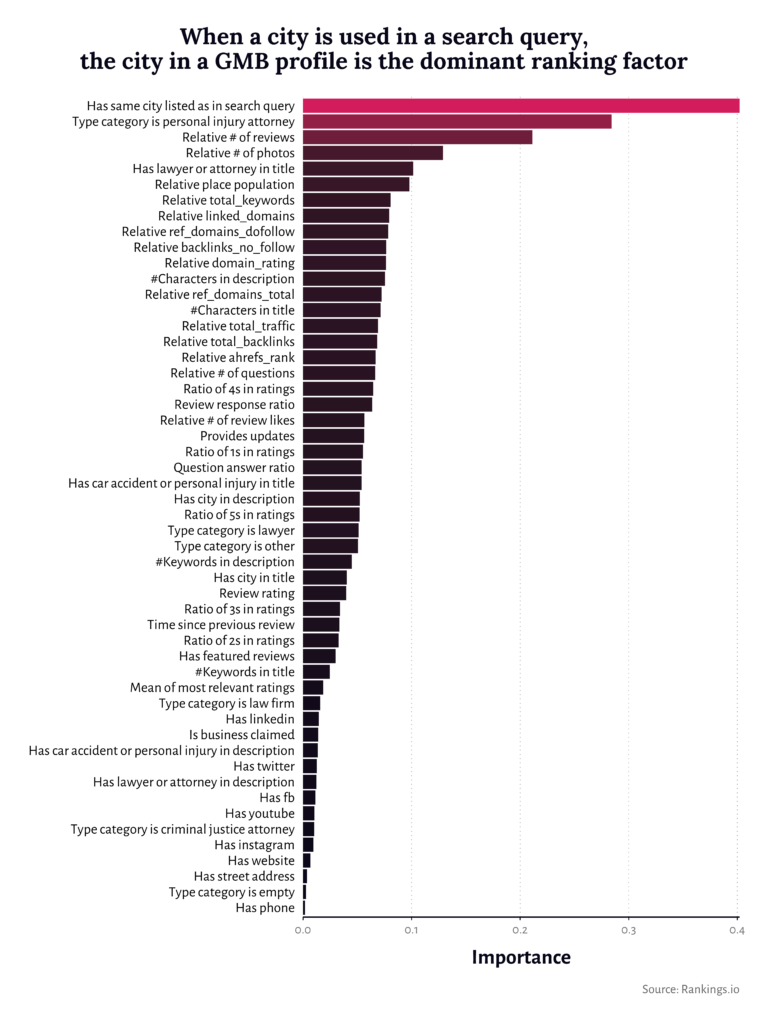 Searches for “available near me” up 100% according to Google

Greg Sterling, in one of his last pieces before departing Search Engine Land, has published an interview with Reeda Nadkarni, head of product management for Local Ads at Google. Sterling asked Nadkarni what retailers should be doing to maximize offline sales during the pandemic, where consumer attention is shifting toward online purchasing.

“Most shoppers now plan ahead about when and where to shop,” Nadkarni said, citing Google surveys in 2020 that find 80% of shoppers now consolidate shopping in order to make fewer trips; searches for “available near me” have grown 100% in the past year; and 67% of shoppers plan to confirm online that an item is in stock before visiting a store.

Local Inventory Ads and Google Shopping can be used to highlight availability of inventory in stores, as can Local Campaigns, which “highlight products available at your store, curbside or in-store service options, health and safety updates, special promotions, and important business changes on a store-by-store basis at scale for multiple locations.” Local Campaigns can be shown across Search, Maps, and the Google Display Network.

Shopify releases The Future of Commerce 2021

Popular ecommerce platform Shopify has released a report that uses its global retail data to predict trends in the coming year. According to the report, titled The Future of Commerce 2021, contactless payment options were offered this year by 122% more retailers than before the pandemic. Similarly, 2020 saw a 64% increase in BOPIS/curbside pickup and a 57% increase in local delivery. Finance options have also grown in popularity, with a 60% increase in retailers offering flexible payment options such as buy now, pay later. Many consumers prefer to shop locally in order to support local economies and reduce environmental impact. In fact, 53% of consumers overall, according to the study, prefer green or sustainable products, and 49% respond positively to retailers who make donations with every purchase.

In a recent blog post, Google has announced some changes to Search that are designed to make it easier for users to access information about the coronavirus vaccine. Starting in the UK, where vaccines are already starting to be distributed, Google will show a list of authorized vaccines in your location, along with information about each vaccine.

Google will also add vaccine info to its popular COVID-19 information panels on YouTube, which have been viewed 400 billion times since launching in March. In the same post, the company announced several funding initiatives designed to assist with the vaccine rollout, including support for a new COVID-19 Vaccine Media Hub and support for fact-checking initiatives to counter misinformation about vaccinations. Google has also committed to continue the fight against misinformation on its own platforms, noting that it has already removed 700,000 videos from YouTube with inaccurate or misleading COVID-19 information.

In his latest update to a blog post from last October, maps expert Justin O’Beirne reported recently on Google’s expansion of hand-drawn map icons for landmarks. O’Beirne’s post in fact tracks a gradual expansion of landmark icons over the course of the last several months, with previous updates appearing in June, September, and October. He notes that Google apparently borrowed the landmark icons idea from Apple Maps, which launched its own set of hand-drawn icons back in 2012. Google’s version underwent a transformation in June, when the original smaller icons were replaced with larger and more prominent versions. Since that time, Google has added icons in more cities. As of the December update, Google now showcases landmark icons in at least 80 cities around the world, including Barcelona, Florence, New York, London, Paris, San Francisco, Tokyo, Madrid, Berlin, Amsterdam, Mumbai, Marrakesh, Jakarta, and many others. 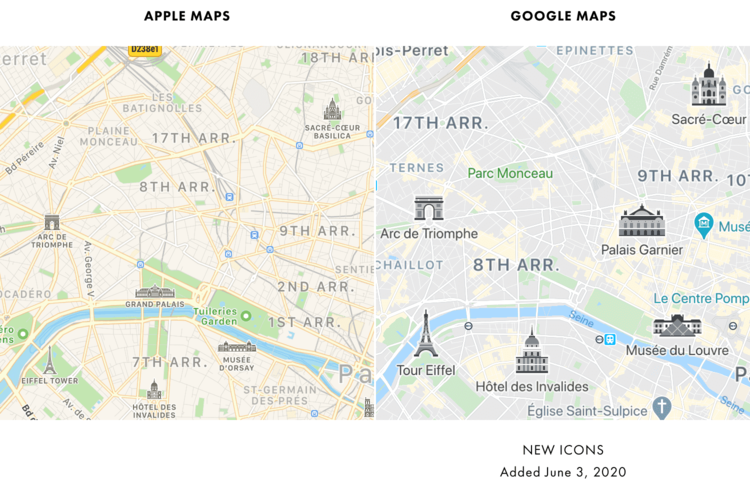