In this week’s update, learn about the U.S. antitrust lawsuit targeting Google; Foursquare’s new virtual assistant; the role of the GMB “direct edit” interface; GMB features that do (and don’t) impact ranking; Google Shopping enhancements for the holidays; and health and safety attributes for hotels.

Department of Justice and 11 states sue Google for antitrust violations

The U.S. Department of Justice (DOJ), along with the attorneys general of 11 states, has filed a massive antitrust lawsuit against Google, alleging that the company used unfair practices to gain a dominant position in online search and advertising. The suit focuses on Google’s relationship with Apple and other smartphone manufacturers, alleging that the company entered into exclusive contracts that made its search technology the default option on smartphones, blocking the competition.

In the suit, the DOJ estimates that Google owns an 80% share of the search market. In the words of the suit, “Two decades ago, Google became the darling of Silicon Valley as a scrappy start-up with an innovative way to search the emerging internet. That Google is long gone. The Google of today is a monopoly gatekeeper of the internet, and one of the wealthiest companies on the planet.”

The suit does not outline exactly what should be done if its allegations are proven to have merit; such remedies are usually delayed until later stages in a case of this magnitude. But they could include unwinding contracts or breaking up the company. Analysts suggest that the case against Google is most easily won in regard to its dominant position in search, as opposed to advertising. But it will likely take months, if not years, for the case to reach trial.

Foursquare, a company whose evolution has taken it from popular consumer app to market-leading location intelligence company, has launched a new, experimental virtual assistant called Marsbot that is intended to work primarily with headphones and earbuds as an auditory form of augmented reality. In the words of Foursquare founder Dennis Crowley, Marsbot is “a lightweight virtual assistant that proactively whispers local recommendations (and other fun snippets) into your headphones or earbuds as you’re walking around.”

Already available for iOS, an Android version is said to be coming soon. The app will whisper tips through your audio accessories about local places, buildings, public art, or people, presumably tapping into Foursquare’s rich repository of location data, but also allowing other users to share location and even record audio snippets about places.

The role and impact of the GMB “direct edit” interface

Ben Fisher has a new post on the Bright Local blog, explaining the purpose of the functionality that allows business owners to edit GMB profiles directly in Maps or Search. Fisher notes that this “direct edit” interface, first launched in 2017 and recently expanded with more features and the addition of Google Maps as an interface option, is designed to make it easier for businesses to edit their information without needing to log in to the Google My Business dashboard.

Fisher claims that 90% of Google accounts contain only one to three business locations, and suggests that for these small business owners, the business profile is the product, not GMB. He reports that Google’s internal name for the new editing interface is the New Merchant Xperience, or NMX. It now includes a performance page with excerpted information from GMB Insights; a simplified menu with options to edit your business, promote your business, or connect with customers; and a prominent Q&A section.

Though the ability to access GMB functions more easily in Search and Maps might seem like a threat to agencies that work with small businesses, Fisher suggest that the opposite is true. These moves by Google will help to bring awareness to a broader base of businesses about the importance, and the complexity, of GMB, causing more business owners to seek help from service providers.

Four GMB features that impact ranking, and three that don’t

Joy Hawkins offered a presentation last week for the Moz Whiteboard Friday series on some GMB features that do, or do not, impact local ranking. Hawkins notes that her company Sterling Sky does extensive testing on the factors that influence ranking, and that they’ve come to the conclusion that only four features in GMB have a direct impact on ranking in local results.

The first of these fields is business name, which Hawkins suggests probably has too great an influence on ranking, given its susceptibility to spam. Though businesses can’t easily change their own names, they can report competitors who are using keywords in their business names inappropriately, using the GMB redressal form. Categories are the second feature that influences ranking, followed by the primary website field and reviews, in particular review quantity.

Features that do not have a direct influence on ranking, according to Hawkins, include Q&A, services, and products. She notes, however, that these features likely have an influence on conversion.

Enhancements to Google Shopping for the holiday season

Noting that searches for “early deals” have increased significantly over the past month, Google has unveiled some new features designed to make it easier for holiday shoppers to find the best deal on products sold online and in nearby stores. The features include price insights, price comparison, and price tracking.

Price insights help consumers understand whether they’re getting a good deal from a particular retailer, showing whether an advertised price is high, low, or typical, compared to prices online and in nearby stores.

Price comparison helps users compare price and shipping options from a range of stores, while price tracking lets users configure alerts for various products so they can be notified when products they’re following go on sale. 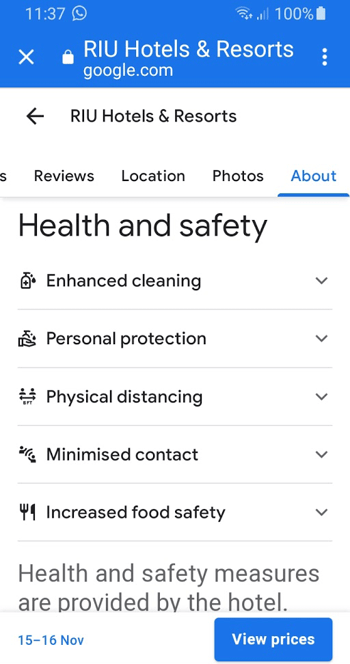