In today's Monday Memo, read about the ongoing debate on the value of citations; MarTech Today's updated report on local marketing solutions; a new study on photo quantity and GMB engagement; Amazon's "no human review" option; and DoorDash's acquisition of rival Caviar.

In an article on Search Engine Land, Greg Sterling asked five prominent local experts to weigh in on the question of whether citations are still an important factor in local SEO.

The commentary covers a range of opinions. Miriam Ellis suggests that citations are business assets that should be managed by the business to the greatest extent possible, especially when they rank highly in your market or contain reviews. Andrew Shotland offers that citations are less of a factor for ranking these days, but are still sometimes referenced by Google so should be covered as a kind of insurance policy.

Darren Shaw reiterates the point I made last week on this topic: citations are currently considered a foundational ranking factor, meaning that they won’t boost your ranking significantly on their own, but it’s hard to rank without them. Shaw and Ellis both suggest further testing is needed.

In Mike Blumenthal’s comments, he makes the important point that Google’s method for building its local directory has completely changed in the last few years. Whereas once Google regularly rebuilt its directory using citations and other sources, now it relies on the comparatively stable data in the Knowledge Graph. Blumenthal reminds us that local directories get little traffic these days, but suggests the search landscape is still fragmented enough that several sites are important to manage. Finally, Joy Hawkins reports that citation building is still part of her company’s toolkit, but they consider it to be a low-impact tactic and sometimes ignore it completely in favor of more crucial activities like website and Google My Business optimization.

The consensus would seem to be that citations can no longer be relied on as a primary strategy for ranking, but remain important for a variety of secondary reasons depending on the site in question and the needs of the business.

MarTech Today has released the sixth edition of its annual report, “Local Marketing Solutions for Multi-Location Businesses: A Marketer’s Guide.” The report surveys the evolution of the market for local marketing solutions and examines several of the most prominent solution providers, including Brandify. The authors discuss five critical elements for local marketing success: listing management, local SEO, local landing pages, reputation management, and paid search and social media. They note that spending on local advertising continues to grow at about 4% per year, with spending by national multi-location brands outpacing that of SMBs and regional players. Among the trends examined, the report discusses the rise of voice search, expanding opportunities with Google My Business such as Reserve with Google, and consumer privacy considerations related to new regulations such as GDPR and CCPA.

A new study from Bright Local has found a surprisingly strong correlation between the quantity of photos in a Google My Business listing and indications of user engagement such as website clicks, calls, and requests for directions. The study surveyed GMB insights data for approximately 15,000 listings and found that businesses with more than 100 photos (the maximum number studied) get 520% more calls, 2,717% more requests for directions, and 1,065% more website clicks than the average business. The effects were felt most distinctly on businesses with a large number of photos, as the chart below demonstrates. 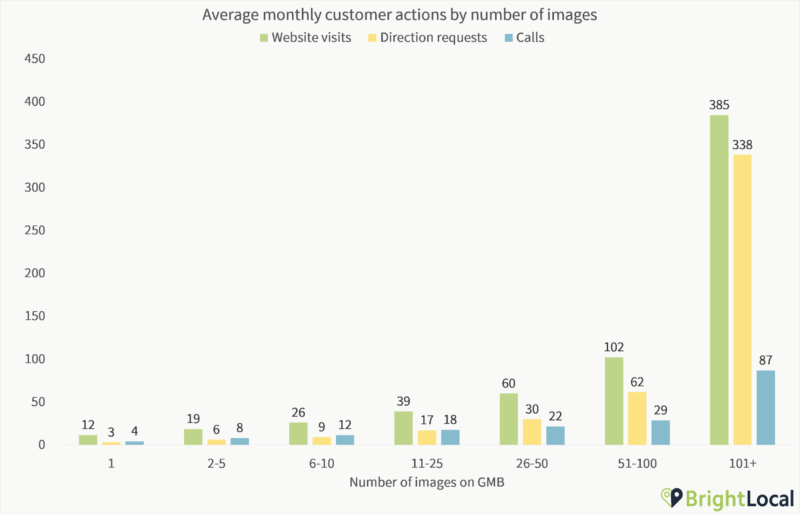 Jamie Pittman, writing about the results in Search Engine Land, is careful to mention that additional factors may be at play, such as optimization of other GMB features. But he suggests that the study seems to prove photos are a significant driver of engagement for local consumers, and that businesses will see increasing benefits when posting a large number of photos on each listing. Of course, photos should always be relevant to your business, and should showcase products, services, and amenities that help consumers understand what you do best.

In an atmosphere where consumers have become increasingly concerned about their privacy when using smart speakers, Amazon has quietly rolled out a feature whereby Alexa users can opt out of having recordings of their voice interactions analyzed by human workers. Amazon previously failed to disclose the fact that employees might listen to such recordings, but the settings in the Alexa app now make this fact clearer and permit users to decline to participate. In similar news, Google was ordered by regulators in Germany to cease the practice of having human contractors listen to audio recordings of Google Assistant interactions, and subsequently suspended the practice across Europe. Apple has also suspended all human review of Siri audio recordings, after a story from the Guardian newspaper in the UK suggested Apple contractors were regularly exposed to users’ confidential information.

DoorDash has announced a $410 million deal to buy Caviar, a rival on-demand food delivery service, from Square, who acquired the company five years ago for $90 million. Three years ago, Square unsuccessfully tried to unload Caviar for $100 million amidst reports it was losing money, so the strategy and pricing of the current transaction are somewhat mysterious; but DoorDash CEO Tony Xu suggests that Caviar’s well established roster of top restaurant brands was a large part of the attraction. DoorDash is currently the most popular delivery app in the U.S. and has seen its market share and valuation grow steadily in recent months. Earlier this year it was named one of the 10 most valuable venture-backed companies in the U.S.