In this week’s update, learn about the announcements in Google’s Marketing Livestream event; hiding phone numbers in GMB; the benefits of GMB Products; a guide to local service pages; the economy of fake reviews; and the getting the most out of Google Q&A.

Google announced several updates to its products and services at its Marketing Livestream event last week. The Customer Match product, which lets advertisers upload first-party data to enable customer targeting in Google Search, Shopping, Gmail, and YouTube, is now available to all advertisers with no minimum spend requirement. Google’s Ads Insights report (which first appeared late last year) has a new feature called Demand Forecasts, which offers 90-day predictions of search behavior relevant to ad campaigns. Google is also rolling out its automated Performance Max ad campaigns to more advertisers and reporting on them in Ads Insights, with the expectation of a global launch for Performance Max later this year.

The company also announced that it is adding product feeds to more ad campaign types, including Video Action campaigns and Discovery Ads. Amplifying the announcement at Google I/O of expanded support for product feed integration with Shopify, Google will now offer integration support for retailers who use GoDaddy, Square, and WooCommerce.

Google also unveiled some new local ad formats, including Auto Suggest ads, which display results based on the user’s location; Navigational ads, where sponsored en route locations are shown to users in the Google Maps navigation interface; and Similar Places ads, which appear when the business you are searching for is closed. Finally, Local Inventory Ads have a new “pickup later” option, in addition to “pickup today” and “curbside pickup.” 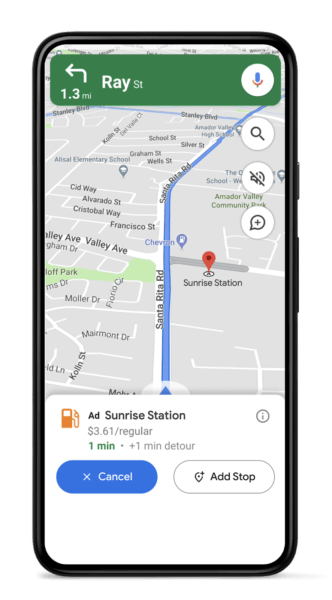 You can now hide your GMB phone number, for some reason

Stefan Somborac posted a screenshot on Twitter of an odd new option in one of the GMB edit screens that are part of the new Search-based interface for updating GMB profiles. This option allows users to hide the business phone number so that it does not appear in the business profile. The toggle appears, not in the business information screen where the phone number can be entered or edited, but under Advanced Settings, where it appears in a miscellaneous list of settings for turning Google Assistant support on and off, managing your store code, and so on. I’m able to reproduce this myself so it appears to have been a broad rollout, although it’s hard to understand why any business would want to hide its phone number from customers. Perhaps the intention is for this to be done on a temporary basis in cases where the business is unable to answer the phone. Again, this new feature is only available in the Search interface, and not in the GMB dashboard.

Business can now hide their phone number in GMB.

The change appears in support documentation that provides instructions specific to the New Merchant Experience. (i.e. direct edit). It does not appear to be available within the GMB dashboard.https://t.co/hB2ksHWvHv pic.twitter.com/9GkxGLeOCI

The benefits of the GMB Products feature

Darren Shaw has a new Whitespark Weekly video that promotes the use of the Products tab in GMB, an underutilized feature that, Shaw says, can be a great method for promoting your products and key business features and making your GMB profile more engaging. Shaw explains that Products, though launched in 2019, have as yet gained little adoption among business owners, despite the fact that they display fairly prominently in the business profile. Businesses can use the Products tab to showcase photos of items as well as descriptions and prices, and products can be categorized into groups such as “Furniture,” “Appliances,” “Decor,” and so on. In a recent study, only 4% of businesses were found to be using this feature. Shaw suggests that Google allows businesses to utilize the Products feature to showcase non-product offerings as well, such as services and brands offered at a store. A few business categories, such as hotels and gun shops, do not have access to the Products tab, but most categories do

Phil Rozek has a new post covering the ins and outs of services pages; in the post, he says the advice he offers can apply equally well to pages covering the products sold by a business. Service pages, Rozek writes, can be a great help with organic ranking and with getting your associated GMB listing to appear in three-pack results. They’re one of the most important factors in overall ranking for a business, and should be one of the first tactics a business deploys when getting started with local SEO. He recommends incorporating FAQ content, photos, videos, reviews, case studies, and other rich content to make your service pages stand out. You should not, however, create separate service pages for every location you serve, simply in order to rank in more geographies. Rozek goes into more detail on these recommendations and a long list of additional tactics, so I’d definitely recommend checking out his post.

The economy of fake reviews

Greg Sterling has reported on the fake review economy as a major challenge faced by both Google and Amazon, citing a recent investigation by the CBC in Canada which claims that a growing black market on Google is responsible for posting fake positive reviews for hire, as well as fake negative reviews in an attempt to extort businesses to pay for their removal.

The CBC uncovered “1,279 businesses across North America connected by 208 fake accounts that posted 3,574 fake reviews.” Though individual fake reviews might not be conspicuous to the average user, looking at a larger number of them reveals odd patterns, such as unrelated reviewers who post reviews for the same list of businesses in locations throughout the U.S.

Fake reviews are sold openly through social media accounts on Facebook and other sites, given that the practices of writing fake reviews and requesting payment for the removal of negative reviews are not illegal. Though Google actively takes down both fake reviews and the accounts that create them, by many indications the process is not thorough enough. Only 20 of the 208 fake accounts identified in the CBC investigation were eventually taken down by Google.

Getting the most out of Google Q&A

UK-based SEO specialist Levi Williams-Clucas has a post on the BrightLocal blog about the Q&A feature in Google My Business and how to make the best use of it. Her recommendations make it clear that GMB Q&A is yet another place where a business has the opportunity to monitor and improve its online reputation. Though Q&A is not a ranking factor, most local SEOs agree that strong input from the business leads to better engagement and conversion. Williams-Clucas recommends that businesses check their questions regularly, use the upvote feature to get their content to appear more prominently, and analyze the content in Q&A as a source to help improve website information and social content.