In honor of the 15th birthday of Google Maps, first launched in 2005, Google has announced several updates, including a new Maps logo and app design for Android and iOS. Here's how the updated app was announced in Apple's App Store: 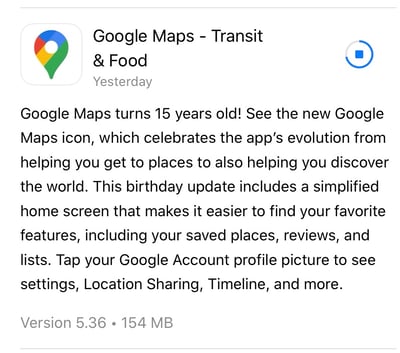 And here's how the new app looks on my iPhone:

When you open up the app, Google shows you a video celebrating the 15th anniversary. Here it is:

The redesign adds several tabs to the bottom of the screen: Explore, Commute, Saved, Contribute, and Updates. The idea is to make it easier for users to access new features as well as some that were previously hidden under the top menu or otherwise less obvious.

However, for me and two other people I checked with -- one iPhone user and one Android user -- the new tabs are not appearing yet, even though we all installed the update. I've noticed in the past that major redesigns in Maps don't always roll out in the same way for every user, so you may see five new tabs today even though we don't.

In the announcement, Google notes some interesting stats:

-- Google Maps contains information on 200 million businesses and points of interest around the world.

-- "Hundreds of millions of people each year" provide information to help improve Maps and keep it up to date.

That last point has a lot to do with the more prominent Contribute tab in the redesign, which should make it a little easier to write reviews, suggest changes when you spot incorrect information in listings, report mapping problems like missing roads, and so on.

The Updates tab is intended to showcase locations that are "trending," meaning I assume that a lot of users are reviewing them or visiting them. Google also notes that certain trusted publications -- their example is The Infatuation, a restaurant recommendation site -- may provide content to Updates. Apparently, Updates is also where you'll now interact with businesses using the Messaging feature.

Google is also rolling out some changes to the transportation info provided to users who commute by train, bus, or subway. In addition to predictions of crowdedness which were already in place, Google will now tell you (based on reports from past riders) about temperature, accessibility, security, and other details.

The company also notes that they will be rolling out Live View more broadly and using it to help you in search as well as navigation. This is the feature that overlays walking directions on live footage from your phone's camera.

Finally, there's a "birthday car" that will show up when you navigate in Maps for a limited time in commemoration of the anniversary. Here's what that looks like: 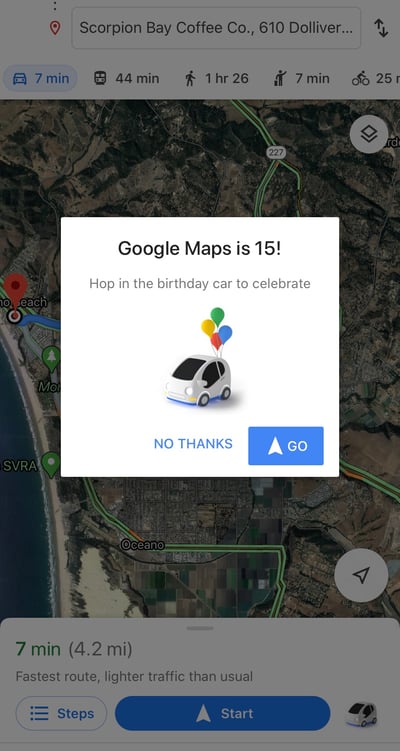 When you navigate, the birthday car travels along with you in Maps to your destination.