UPDATE 8/27/19: Google has now removed the old Attributes section from all hotel listings. Users can only manage Attributes using the new Hotel Attributes screens described below.

This week on Twitter, several local SEOs discussed the mysterious disappearance of the amenities settings from the Google My Business dashboards of some hotel clients. We saw this for a few of our clients as well. At the same time, some subcategories for hotels became unavailable, such as "Budget Hotel" and "Boutique Hotel."

Here's the old Attributes section for a hotel listing: 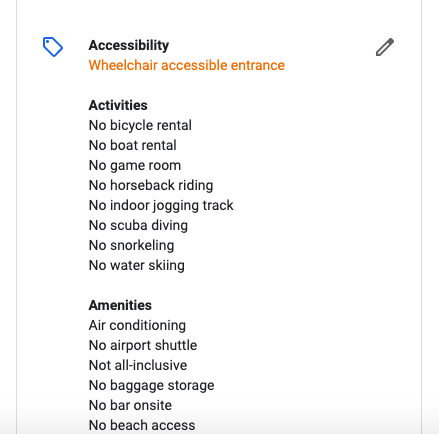 Clicking on the pencil icon brings up a pop-up window where users can still edit the "old" Attributes:

But right below this section in the Info tab, there's now another heading called Hotel Attributes:

The pencil icon for this new heading takes you to a stand-alone page for editing a wide range of attributes: 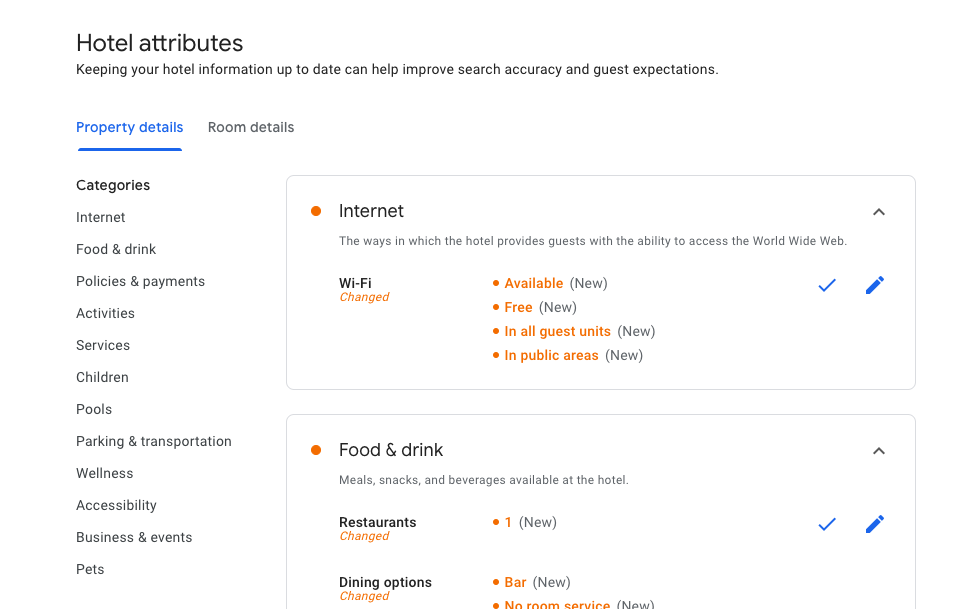 Many amenities, such as Wi-Fi, Air Conditioning, and several others, are now listed twice, both in the old Attributes section and in the new Hotel Attributes section. Indeed, the initial settings in Hotel Attributes appear to be carried over from the settings in Attributes. But in the new Wi-Fi section, for example, there are many options that didn't exist before, such as being able to indicate that Wi-Fi is or isn't free and is available specifically "in all guest units" and/or "in public areas."

In fact, the more you dig into the settings in Hotel Attributes, the more granularity appears. Here's just a part of the new Food & Drink settings page:

As you can see, there are a ton of new settings that seem designed to let hotels list amenities in a highly detailed fashion. Wondering what "Other" means in the screenshot above? Here's the popup that appears when you click on it: 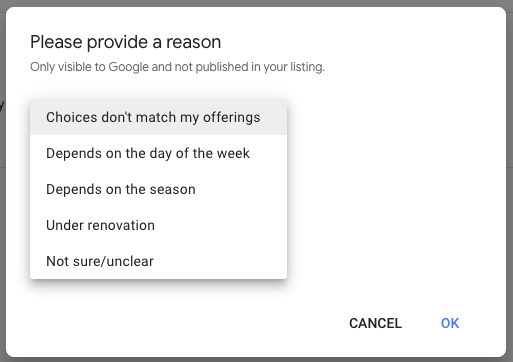 It's unclear at this point how long hotel listings will have two sets of attributes, but this does appear to be a gradual rollout with not all hotels yet seeing the new settings. One imagines that eventually, the new settings will replace the old. We've reached out to Google for further clarification on that point.

Since late 2018, Google has been steadily rolling out new features in the hotel space; I discussed many of these in a column on Street Fight back in April. This latest development indicates that Google wants to provide hotel customers with as much information as possible to make informed buying decisions -- and indicates that Google is continuing its quest to vacuum up data about businesses to serve travel searches, long-tail queries, and voice searches.

The Local Marketing Dos and Don’ts for Hospitalities

Announcing the Brandify Guide to Google Optimization for Hotels