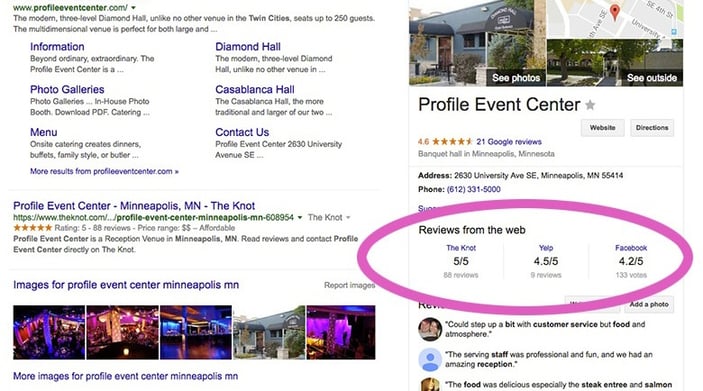 Recently, Google has made quite a few changes to local review guidelines. Last month, Google exposure with reviews to other customers. With nearly 90% of consumers stating that they trust online reviews as much as a personal recommendation, user-generated content has never been more important. Recently, Google launched Critic Reviews, which allow any publisher to apply to have their “critic reviews” displayed for a local business. Following critic reviews, Google made some updates to the guidelines for using schema markup reviews, advising that only reviews produced directly from a brand’s own site can utilize review markup. Now, Google has introduced Reviews from the Web, which pulls consumer reviews from third-party sites to the knowledge panel on a desktop and presented directly under NAP information on a smartphone.

Unlike critic reviews, which come from approved “experts” in a specific business industry, Reviews from the Web are Google’s attempt to give brands a way to display user-generated content. Google’s Reviews from the Web acknowledges that consumers care about a brand’s reputation on trusted properties outside of the brand’s own site, and it will give this content prominent placement in the organic search results.

In the above image from Google, Reviews from the Web are given highest priority on a smartphone, with critic reviews and best-of-lists just below. Reviews will be pulled from local places that span a variety of verticals such as stores and restaurants.  Reviews from the Web is active globally, and brings aggregated user ratings from up to three review sites, such as Facebook, Yelp and TripAdvisor.

Reviews from the Web was likely rolled out as an extension of Critic Reviews, allowing brands to backfill content with crowdsourced reviews when critic reviews are not available from journalists and industry experts. The platforms included will probably depend on a brand’s local presence on a given review channel, making it imperative for brands to claim their local listings across all relevant platforms.

Google’s criteria for implementing Reviews from the Web are listed below:

By implementing review snippet markup and meeting our criteria, your site’s user-generated composite ratings will be eligible for inclusion. Add the Local Business markup to help Google match reviews to the right review subject and help grow your site’s coverage.

Reviews from the Web will give brands the opportunity to showcase positive customer experiences and garner more store visits. Yet, brands without a review moderation strategy or unclaimed local listings may find themselves at a disadvantage. Not only are reviews a ranking factor, but an influx of negative reviews could drive away potential foot traffic for brands without a holistic review moderation strategy.

Google’s Reviews from the Web provides a valuable source of content that that is likely to engage consumers and push more foot traffic to stores. As Mike Blumenthal observed, having a review management system, may offer SERP display benefits for enterprise brands.

The impact of Reviews from the Web may have many brands seeing effects on rankings very soon, if not already. The rich snippet has already demonstrated the ability to open the republishing of brand reviews with some of Brandify’s clients, providing review visibility and the social proof brands need gain local fans and attract new business.

Brands can make the most of Google’s Reviews from the Web by cleansing and syndicating location data, claiming local pages across all relevant platforms and implementing a review moderation strategy that garners feedback and effectively addresses customer concerns.

Capitalize on the value of Reviews from the Web by performing a location data audit with Brandify’s free multi-location Quick Scan.